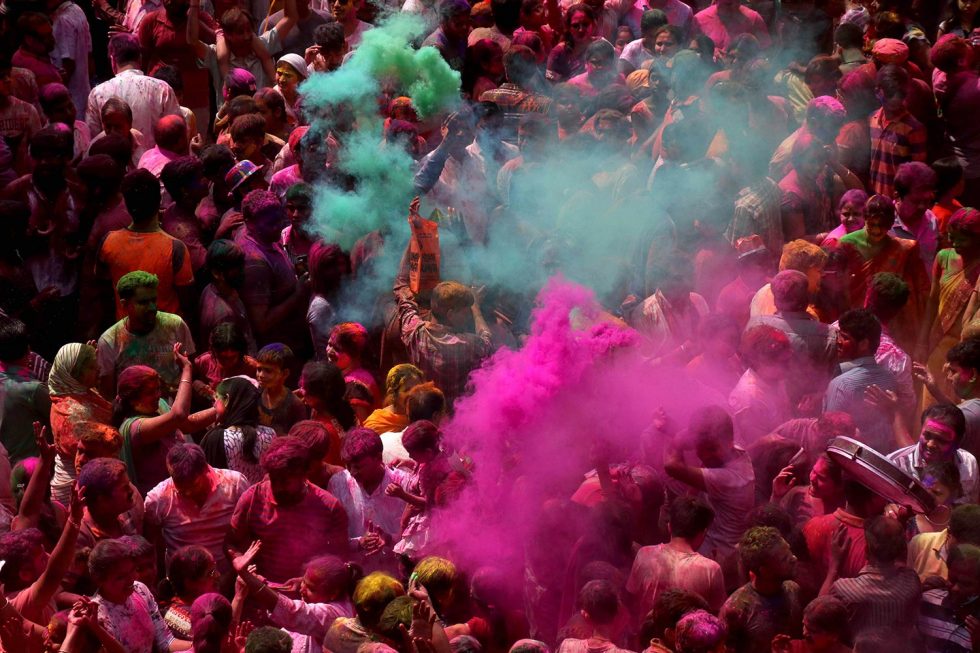 In Travel in India

Holi Festival in India 2021 – the Festival of Colors

One of the most popular festivals in India, the Holi Festival, also known as the Festival of Colors, attracts crowds from all over the world to plan a trip through India, taking advantage of this festive date to celebrate, with the Hindi population, this incredible party. The 2021 Holi Festival takes place from March 28th to 29st.

The Holi Festival, despite its origins in India, is celebrated around the world, as if it were a franchise. Still, it is nevertheless in India, where the real cultural feeling, with its very present origins, must be experienced at least once in your life.

Like much of the culture of India, the Holi festival has its origins in a very distant time, figuring in Hindu mythology, with disputes between powerful beings.

In short, King Hiranyakashipu, thinking of himself as a God, did not allow his son to worship the God Vishnu. Then he ordered Prahlad, the sister, to go into the fire with his aunt, Holika, judging her to be immune to fire. Nothing went as expected, and Holika died.

Another more exciting story, which gave the name of Festival of Colors, refers to the games of Lord Krishna, who loved to play small pranks with the girls of the village, soaking them with water and colors. This story already gives a short idea of ​​what awaits you, not only from the girls in the town but from everyone.

But these days, this story has little connection with the celebrations you will witness there. And although the name Holi means fiery, it is with the most vivid colors that this party is celebrated.

In a more realistic feeling, the Holi Festival celebrates the beginning of spring, with wishes for a year of a good harvest.

Like many festivals in Asia, there is no right day for the Holi festival. It is celebrated on the day immediately after the full moon, that is, this year, it will take place on the 28th and 29th of March.

But in some regions like West Bengal, you can start a day earlier and don’t be surprised if you begin to see the party starting even a week more first in some cities.

Where to spend the Holi Festival?

The Holi Festival or Festival of Colors is celebrated throughout India. Still, due to the tremendous cultural differences that you find throughout the country, the celebration can have great contrasts, from north to south of the country.

Let’s now get to know some suggestions for places to spend the Holi Festival. If you are planning a trip through India, you will have many alternatives to choose from and put it on your path.

Just remember that the dyes that are spread can stain clothes forever and stay on the body and hair for days.

Rajasthan hosts one of the most exotic celebrations of the Holi Festival, combining the color of the festival itself, with the participation of the already traditional elephants, also decorated with the most vibrant colors, typical of all India.

Jaipur, the capital of Rajasthan, is a great choice to spend this festival. However, Pushkar will also be a good alternative.

Jaipur, the Pink City in India – Places to visit, Things To Do

If you are planning to travel to India, then the Pink City of Jaipur and its Hawa Mahal should be on your plans. This travel guide through Jaipur will help you to find the best places to visit and things to do in Jaipur, the best time to go, how to move around and places to stay.

If you want to spend this festival, with lots of color and beach to mix, then the paradise of Goa will be the ideal destination. The Holi Festival here is also celebrated in this region, especially in Panaji, the capital, with parades through historic streets, and lots of colors.

Beaches in Goa are undoubtedly an incredible holiday destination. And celebrating the Holi Festival on those beaches is genuinely fantastic since you have de ocean to clean yourself on those warm waters at any time. But the relation between the colors and the sand can be more complicated.

Holi celebrations in Varanasi begin with prayers for the city’s Hindu temples, followed by parties in the streets of this holy city, with everyone throwing wet colored powder to anyone passing by.

Living this Holi Festival in the most sacred city in India is a mixture of feelings of joy that this party involves, together with a religious weight that is felt at every step in this city.

In Agra, in the neighboring town of Barsana and Vrindavan, takes place perhaps the strangest celebration of the Holi Festival. There you will be able to attend an event called Lathmar Holi.

The history of this event comes from Hindu mythology. Nandgaon, in Mathura, is where Lord Krishna was born, after spending his childhood in Vrindavan.

Over the years, Krishna used to go to Barsana, the village of Radha, where he teased Radha and other Gopis (shepherds), painting them with paint.

And, of course, Radha and the other shepherds took revenge on him, beating him with wooden sticks.

This is where the Lathmar Holi tradition comes from, where you see men singing and teasing women, causing them to start hitting wooden sticks while using a shield to protect themselves.

It is very curious, but it is well worth watching.

For that, you will have to reserve a place to stay well in advance, as it is an event that, as strange as it may be, attracts an immense crowd to attend.

The event takes place about a week earlier, in the middle of the 10th of March.

Holi Festival in Barsana has another curiosity. It starts in Barsana, Radha’s birthplace, and goes to Nandgaon the next day, in the village of Krishna.

Baths of color will not lack at the Holi festival in Barsana, or Agra, for which it is prepared.

In the capital Delhi, the Holi festival has modern outlines, adding to the classic color bath.

The streets are filled with people with colorful paint balloons, shooting everyone who passes the streets of the capital.

The best place in Delhi to experience the Holi Festival in Old Delhi, where the city’s oldest bazaars such as Chandni Chowk are located. There, the problem is even finding an escape where you can hide.

In those narrow streets, full of people, you will have little chance but to join the war of colors.

In Delhi, during the Holi Festival, there is also the Holi Cow Festival, a new festival with folk music bands playing live, with a lot of alcohol in the mix. The event is paid for, but it is worth watching.

Transports India - How to Move Around in India

India is a big country, and it is essential to know about the transport in India, the best way to travel around the country using transports like the train, bus, rickshaw, to obtain the best experience, in safety, and to take better advantage of your time there.

Another celebration quite different from the Holi Festival, as you would expect, whether or not you were in a region of India with a very different culture and religion – Sikhism.

Instead of the color baths, you have the opportunity to watch Warrior Holi, a very physical demonstration of sword fighting, wrestling, martial arts, all simulated, of course, with all the players dressed in turbans.

Holi Festival in the Punjab region has an ancient tradition, starting in the early 18th century

Hampi, in the Karnataka region, is one of the cities in southern India to experience the Holi Festival. Here, without the most cultural outlines, without a strong Indian presence, it is a perfect place for those who choose to spend this party together with other Western tourists.

Everything happens in Hampi I-land, across the river from the historic city of Hampi. A city that looks more like a mini-resort for the western population, in a landscape of rice fields and palm trees and many huge stones.

The party is crazy, starting early in the morning, lasting almost all day and ending in the river, washing all the paint that you can get.

It’s not very crowded, and it happens in a tiny space. It’s almost like a familiar environment.

Caring for the Holi Festival in India in 2021

For a backpacker traveler, it is already common to travel with the oldest clothes, and, during the trip, leave a large part along the way.

If you have that thought, then you don’t need to worry about it, because you already know that, at the end of this festival, your clothes will go straight to the trash, completely colored.

Panaji, The European Goa's Capital - Things to do and Places to See

If you are planning to travel to Goa, the ideal is to start with its capital, Panaji, where you will have an encounter with the history of this beautiful city, full of marks of the Portuguese ancestors. This travel guide will help you make the most of your trip, find the best places to visit, what to do, where to stay and how to get around.

So, where do you plan to spend the Holi Festival in India? The north is where Holi is most celebrated, with some exceptions to the south of the country. Or at least it is where it is celebrated most intensely.

With the various ideas listed in this article, you have many solutions to tailor your journey and interests to the ideal place to spend the Holi festival.

For our part, because we really liked the Punjab region, this can be a fascinating and different solution. Still, if you want to live this party really seriously, then Jaipur or Pushkar will undoubtedly be the best solutions.

Pack your bag and go, and, on your return, be sure to comment on your experience for the Holi festival. 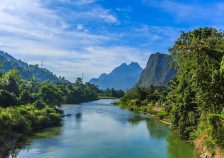 Laos Travel (Southeast Asia): Things to Do & Places to Visit

Transport in Laos: Getting around in this mountainous country

Transports India – How to Move Around in India